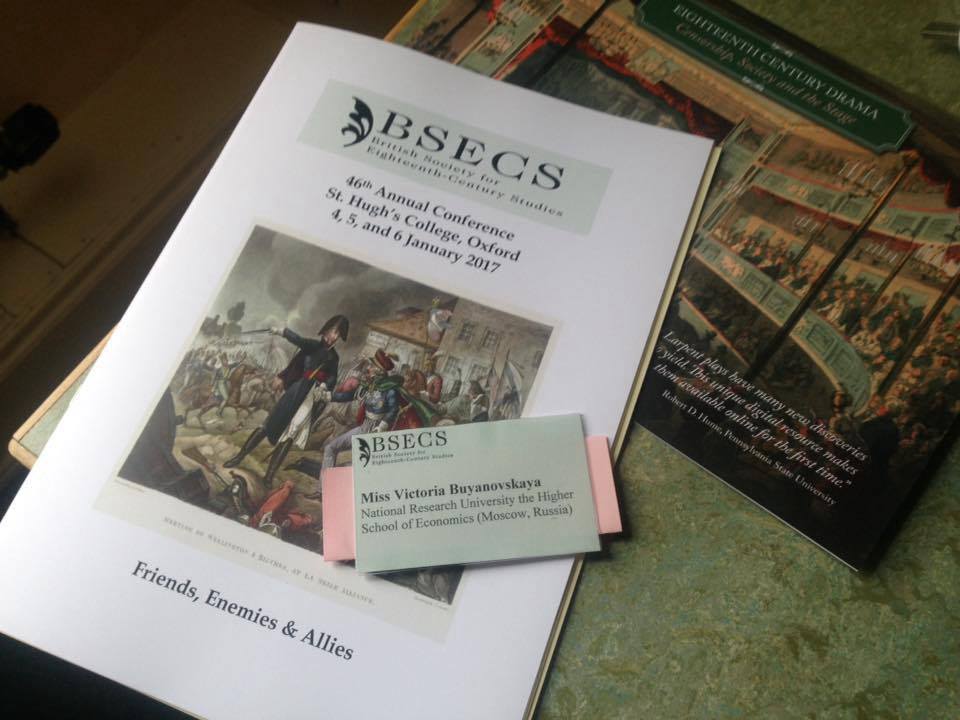 My experience of participating in in the British Society for Eighteenth Century Studies’ (BSECS) annual conference was, undoubtedly, more difficult than other academic events. My presentation was based on my term paper, but it was the first time I had to address an English-speaking audience and talk about probably one of the best studied texts in English philology – Laurence Sterne’s A Sentimental Journey Through France and Italy.

At first I felt uncomfortable that most of the participants were native speakers and seemed much older than me (people usually start participating in these conferences while working for their PhDs). In addition, many already knew each other – the Society’s annual conference helps researchers maintain long-term professional and personal relations, and, as I later came to understand, that’s why it has an atmosphere of a long-anticipated meeting among friends. I was worried that I would not be able to become part of this conference world, so I was more nervous before the presentation than ever before. But I met some of the most attentive listeners I have ever seen among the participants, and it was particularly nice that they were really interested in my paper and came up to discuss it with me ‘backstage’.

Attending experts included a lot of Sterne researchers, who formed something of a friendly club within the Society, and I found it very useful to listen to their opinions. My social circle expanded significantly, and now includes colleagues from Italy, Britain, Argentina, and Germany, which also helped me to practice the languages I’m learning (German and Italian).

The conference’s interdisciplinary character and the variety of topics covered also seemed unusual to me. The main theme, ‘Friends, enemies and alliances’, was chosen, in part to reflect today’s international situation. One of the plenary sessions was dedicated to the potential correlation between Brexit and 18th century politics and culture.

And, of course, the conference’s tone was largely created by its setting: meetings and special events were held in the 19th century buildings of St Hugh's College, Oxford, and we were accommodated right there in the College. It is surrounded by older colleges, and I spent some of my free time visiting them. I was especially impressed by Christ Church College with its renowned Dining Hall with long tables, where Harry Potter was filmed. Walks around this beautiful university town felt like an organic part of the conference. One of the sessions even took place at the Ashmolean Museum, the main arts museum in Oxford.

The BSECS conference is a true ‘festival of research’. This year the Society has held its 46th conference, and over this time it has developed strong traditions, which have become a natural part of Oxford’s centuries-long traditions. I was impressed by the atmosphere of the conference’s formal dinner. The President of the Society delivered an inspirational speech, sparking a lively response from the audience. The BSECS conference undoubtedly has it special spirit, and I sincerely hope my colleagues overcome their fears and take part in this and other similar conferences!